This Spring, if you’re thinking of moving, upgrading your kitchen, or simply want to replace your coffee maker, you may want to consider one brand that might not be the most obvious company. Today’s appliance is from a firm better known, at least in the United States, for their vacuum cleaners and larger products like refrigerators and even washing machines. But if you want a great cup of coffee, and would ideally like to match your other small appliances across a lineup of various models, then you’ll probably be interested to hear about the Expressionist family.

The Electrolux Expressionist Thermal Coffee Maker (model ELTC10D8PS) is a countertop 10-cup coffee brewer, with an attractive stainless steel body and a permanent gold-tone filter included so you don’t need to worry about buying (and using, and disposing of) paper filters. Like most decent coffee makers, it’s programmable, so you can wake up to a fresh pot. And if you wake up late, no worries: the thermally sealed carafe will keep your drinks piping hot, and there is a keep warm mode which will help even further..

We liked the inclusion of a water filter- which they suggest changing about every 60 brews- and yes, you can pause the brewing and grab a quick cup while it’s still perking. And for ease of refilling, the water tank is removable. They brag about the “HighContrast LCD”, but it’s basically just a nice, bright LCD screen… and, similarly, the “AromaStrength Selector” is basically a way to extend brew time a bit, which increases extraction and makes for a stronger brew (and is best for smaller batches, as you can brew even four or so cups at a time).

Brew temperature was solid, and the head sprayer does a good job of making most of the grounds wet, a nice contrast to cheaper coffee machines which tend to be inconsistent and dampen only a portion of the grounds. And, as mentioned before, if you like the look of the Expressionist- and we definitely do- then Electrolux has plenty of other items for your kitchen, from their immersion or ‘tabletop’ blender to their kettle and toaster. Available now, online and in stores, expect to spend around $150 for the Electrolux Expressionist Thermal Coffee Maker. 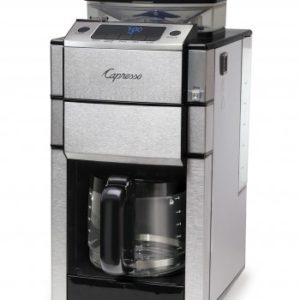 A Duck For Every Pot: Berghoff’s Children’s Line