Here at Truly Obscure, we are a big fan of purchasing knives individually instead of in large sets from Target or Wal-mart. The average cook uses 3 or 4 different knives, not 8. No one here has ever used all the knives they purchased in a knife set, and anyone who purchases a regular knife set, probably doesn’t use all of the knives. People who know how to properly use all those different knives and cook enough for each of those occasions, generally appreciate a well-made blade enough to buy a good version of it. It is also important to buy the right version of a knife for your particular cooking style. So even if you’re an occasional chef, I’d recommend looking for good knives individually, and letting your pre-packaged set collect dust. It’ll improve your kitchen life.

With that in mind, we’re looking into two great knife makers (well, actually three, as you’ll see), with very different styles. The Kai Shun Kramer knife is a collaborative project from Master Bladesmith Bob Kramer and the Japanese knife maker Kai Shun. The two other blades we are looking at are both from the Swiss company Victorinox, long known as Victorinox RH Forschner. They are well-known for their Swiss army knives and for their cheap and sturdy cutlery.

The story behind the Kai Shun Kramer knife involves Bob Kramer, a Master Bladesmith. Bob Kramer made these knives through hand-forging Damascus steel, which is created by combining different steels and the finished product usually has lovely and intricate patterns across the knife. Requiring more time than most knives, Bob Kramer was selling these ones for over $400 a pop. Despite the pricetag, his knives became so popular that a 2-year waiting period was insufficient to fill all the orders. He decide to not take any more orders until the turnaround time could be reduced, and he paired up with Kai Shun to manufacture a blade that could be produced for the mass market. The result was the Kai Shun Kramer knife.

The Kai Shun version has a high-tech SG2 core and is Damascus-clad instead of completely Damascus steel. It also uses stainless steel, to better endure ordinary kitchen conditions. The Kai Shun Kramer knife ends up looking sleeker and shinier than the original. It is a very solid knife with a nice weight. The weight is well distributed, even compared to other Kai Shun knives I have used in the past, and makes it a substantial knife that is very easy to use. I cannot compare it to the original, but the Kai Shun Kramer 8-inch chef’s knife is absolutely one of the better knives I have tested and the look alone puts it far above the rest.

Kai Shun Kramer is releasing a 7-piece set including an 8-inch chef’s knife, a 7-inch Santoku and a 4.75-inch utility knife. Each can be purchased individually and is priced slightly differently. The 7-piece set is about $1500, and unless you are a professional or an avid amateur, I would recommend just adding a single knife, either the Santoku or the chef’s knife, whichever you prefer to do the majority of your chopping with. The 8-inch chef’s knife runs at $340 (normally over $400) exclusively at Sur La Table . And if you’re in the market to purchase one of these knives, check out this interesting back story on Bob Kramer and his knives , it’ll make owning one all the more worthwhile.

Victorinox knives , formerly RH Forschner by Victorinox, are considered some of the best knives for the price. Typically, their knives are very light and that was certainly true for all the knives we tested. Most of their knives have a Fibrox handle and a stamped blade instead of forged one, though they also have rosewood-handle and forged-blade varieties. Forged blades require more steps and are generally responsible for the greater share of high-end knives. They are also more expensive to make. Victorinox keeps their costs down in part through stamping, which also allows for thinner and consequently lighter blades. This makes the knife feel slightly “cheaper” since many chefs associate weight with quality, but the edge itself is wicked sharp and a lighter knife can certainly be less of a workout in the kitchen.

We tried out their 7-inch Santoku knife with a granton edge. A Santoku knife is a form of chef’s knife with a flatter blade. Some people prefer a rounder blade that allows for rhythmic, circular chopping. Santoku knives can come in other sizes as well, but generally a 7-inch blade is about right. A granton edge has indents, like small pockets, carved into the blade at regular intervals that allow surface tension to be dissipated, allowing the juices to exit. The idea being that chefs can cut sticky items more thinly without breaking up the food item they’re trying to neatly cut. We did not notice a difference on items like carrots and broccoli, but there is not supposed to be a difference there. Trying it on chicken and liverwurst, one writer found it to be somewhat easier to cut smaller pieces. I did not personally notice much of a difference and that led me to look online, where I found a fascinating debate on regular knives versus scalloped/granton-edged — the discussion uses the terms interchangeably, but Victorinox defines them differently for their knives. Santoku knives are available for $44 or $30 on Amazon.

We also tried out Victorinox’s Precise Slicer knife . This serrated knife comes either right-handed or left-handed, depending on which you prefer. It has an adjustable attachment that allows for precise cuts and can be tweaked to various widths. This knife was a lot of fun to use. The adjustable slice control is so well designed that cutting motions naturally fall into a rhythmic pattern. With serrated blades, I am always a little wary, since I do not like to sharpen them. Victorinox blades are known to last fairly quite a while, however, and we’ve seen sharpeners that can handle serrated edges nicely. It seems the ideal knife to cut bread and baking items. However, I found it quite nice on vegetables. It encouraged nice, crisp motions that seemed to hurry along the process and the vegetables I cut were all uniformly sliced, making for even and attractive presentations and swift chopping. The Victorinox Precise Slicer is $70 on Amazon . 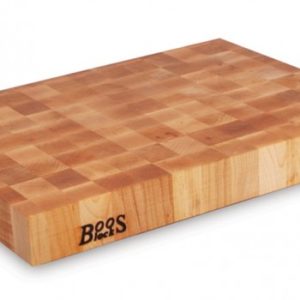 Spruce Up Your Kitchen With John Boos’ Maple Cutting Board