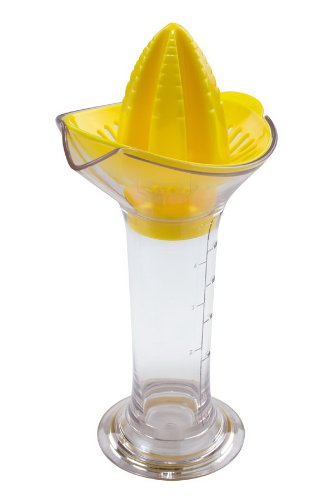 Saturday mornings were always my favorite growing up. Not for the normal reasons, like being off from school or cartoons, but because it meant I would wake up to the smells of an extravagant breakfast wafting up into my bedroom. Even I cannot sleep through that. The first thing I would be greeted with, and probably why I have trouble in the morning now without it, was freshly squeezed orange juice. My brother and I would each get our own orange. It was not a lot, but it meant the day had begun.

I mostly buy carton orange juice now, but I often miss the pleasure of a fresh squeezed orange, which was the first thing I enjoyed when I got my hands on the NewMetro Design JuiceLab. This juicer is super handy: small, easy to squeeze citrus, dishwasher safe, and has a measuring feature directly below the juicer (which hold up to 5 ounces and makes it perfect for measuring out amounts while cooking). It's also really good about keeping pulp out of the juice, has a drip free measuring spout, has a grip on the base to help prevent tipping, and even has a storage cap for the top if you wish to save the juice for a later time. The measuring feature conveniently has cups, ounces, and milliliters labeled, making it very versatile. And liked that it's American made from 100% recycled BPA-free plastic.

As you might expect, the JuiceLab is a little more expensive than some basic juicers at $18, but keep in mind all the smart details it comes with, and the fact that you can get it in orange, white, or yellow.

Wheeling Into The Holidays With Culinary Institute Of America and Handley