We’re on a housewares kick, thanks to a veritable banquet of new kitchen gear. Yesterday, we discussed steaming your food, plus some great tools. And today, we’re going to be blunt about sharpness- and show off one of the coolest knives that we’ve seen, a piece of cutlery that will give your visitors envy and add a touch of modernism to your knife rack.

The French company TB (technically Tarrerias-Bonjean) might not be a household name around the USA, but they’ve got a secret weapon in the Evercut brand that will strike fear into the hearts of other manufacturers. The TB Evercut Furtif Chef’s Knife is a black-as-midnight titanium carbide blade with a beautiful package and a sleek, very stealthy shape befitting the name (which means “stealth” in French). Perfect for the chef fond of black colors, the firm claims that the material used in the knife will keep it’s sharpness “300 times longer than steel, and five times as long as ceramic blades”.

The knife blade feels like a fairly normal chef’s knife- 19cm long, with a full tang blade- with a pretty even balance. The handle, at a glance, look to be uncomfortable as it’s got a strange set of edges and ridges. Instead, it’s actually pretty stable, thanks partially to the coating that kept it easy-to-grip and hold. As with any professional blade, you probably want to hand wash for long-term care, but we did throw ours in the dishwasher to no ill results a couple of times- the coating was easy to clean, and stayed solid despite cutting through bones and some harsh treatment.

Those who are used to a the rolling motion with upper pressure for chopping might find this blade a little thing and hard to press, but most chefs will be taken by the looks, and the incredibly sharp, durable blade. It stands out amongst other cutlery, but is reasonably priced for high-end knives, available for a totally fair 99 euros or so ($134 + shipping) directly. 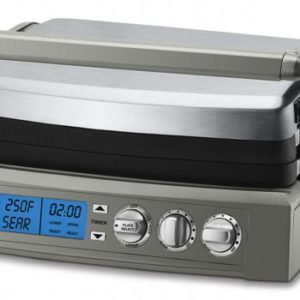