If you like to cook at home, you might have tried out a deep fryer, and if you haven’t then you’ve almost certainly fried foods in a pan. But chances are that you’ve turned against it for most occasions- other than turkeys for Thanksgiving or some French fries, most families have found the results too oily. Health concerns have become increasingly important around the dinner table and at the grocery store, and it makes sense that you’d consider them when preparing meals too.

The De’Longhi MultiFry is what they call a low-fat fryer and multicooker, which the company claims will allow you to cook foods with little or no additional oil. It’s sort of an oven, with a 1200 W heating element and a fan on top, but the small size, a second heating element at the bottom, and a removable mixing paddle make it more capable than most. It’s round shape allows air to circulate evenly, and also for items to be stirred for even cooking, so you can make risottos, stews, sauces, pastas- or take out the paddle to heat up meat, fish, bake cakes and even pizzas as well.

There are are models in the line- the larger 1363 and the slightly smaller 1163 as tested. We appreciated that De’Longhi made clean-up fairly simple, with the lid, bowl, and paddle all being dishwasher safe. And one unusual touch is the free app, available for both iOS and Android devices, that allows you to access hundreds of recipes. As with everything that tries to do multiple things, it does mean that it can’t do any one thing quite as well- we found it to be fairly slow, certainly much slower than a fryer and less speedy than most ovens as well. The MultiFry is also loud- enough that it can be heard from outside of the kitchen.

We’ve seen De’Longhi gear before, and it’s always been a good value. The black color will go with anything, and a transparent top means you can check on your food visually. There is plenty of space inside for even several pounds of potatoes, enough for a big dinner, and cooking was nice and even. You might not even have to use oil, especially for frozen items. But you might miss specific the ability to set a specific temperature- there are four power levels but you can’t adjust them to any finer degree. Still, this little guy is pretty simple and capable, with what they call surround heating. Expect to spend around $249.99 online and in stores for De’Longhi’s MultiFry FH1163.

Express Espresso, With a TWIST 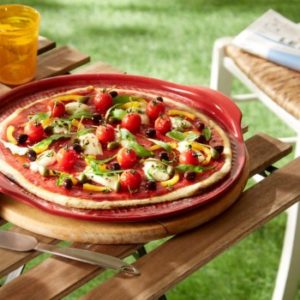