One of the hardest things about coffee is figuring out the right amount, and preparing it properly. After all, it sometimes seems as if there are more ways to make java than there are coffee shops in New York City- from the venerable French press to pour over setups. But perhaps the two most popular methods in the United States for folks at home at the classic drip brewer and the single-cup pod system, as they serve the two most important audiences- an individual person, and a group or family.

The Cuisinart Coffee Center puts both of those brewing methods into a single machine, which allows them to take up less counter space than trying to have separate appliances. And you’ll be able to use either your own beans and make a full 12-cup pot, use their reusable filter cup for single-cup brewing, or use the popular K-Cups in any variety or style. The dishwasher-safe carafe is glass, you can adjust the strength of your brews, and there’s 24-hour programmability too. Plus, the single-cup side is flexible enough to brew in six, eight, or ten ounce sizes.

We’ve seen plenty of Cuisinart coffee brewers, most recently an espresso machine- and quite a few K-cup machines from Keurig directly and other companies as well. This one features a charcoal water filter, and a fairly large water reservoir for the single-cup side, allowing you to brew a few cups without worrying- but you’ll need to fill the main drip reservoir separately each time, as with most brewers, and it is a little difficult to reach. We found the K-Cup coffee results to be a little less hot than with dedicated systems, though the drip side was both as fast and as consistent as others we’ve tried. It won’t make your espresso drinks, nor is it compatible with the 2.0 K-Cup pods, but the Coffee Center does allow you to capture both worlds in one good-looking, easy-to-use machine.

If you don’t have much space between countertops and cabinets, it might be a bit awkward to make it work, as it’s fairly tall- with enough space for you to brew single cups into a travel mugs. But for those with more vertical space, and less room on the counters, the Cuisinart Coffee Center provides great-tasting coffee with a lot of flexibility. And it comes with a very solid three-year warranty too. Expect to spend around $199 online and in stores. 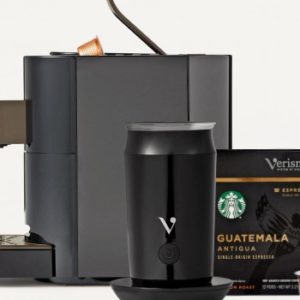