The history of coffee is complicated, and even the much shorter history of the beverage in the United States has quite a few chapters. For those who know a bit about the British obsession with tea, and the events of the Boston Tea Party, it shouldn’t be a surprise that it became a patriotic duty to give up tea for coffee around the time of the revolution. Our home, New York City, was where the first American coffee roaster was founded, and it was a pretty special treat for quite awhile due to it’s high price- and still the city boasts dozens of roasters and the highest per capita consumption of any large city.

But, while we offer coffee in widely varied formats from nitro cold brew to single-origin espresso shots, one thing many locals haven’t tried is a rich, dark cup of Turkish coffee, a bit sad as the first coffee house was in Turkey. The style, also called Greek coffee, is distinctive, and it’s now easier than ever to make at home thanks to the Arzum Okka, the first (and only) automatic Turkish coffee machine. Available in Europe for a couple of years, the coffee maker is fairly new to our shores- and while it looks kind of like an exotic Nespresso machine, it doesn’t require capsules or pods but uses ground coffee. An important note, though- your average coffee grinder can’t reach a Turkish grind, and even commercial grinders may lack the burrs or settings to achieve the necessary fineness.

Winner of a Red Dot Award in 2014, even a glance makes it obvious why. The Okka has simple buttons and straightforward operation, with some elegant lines, a wide drip tray, and accessible water reservoir- and it’s easy to clean too. You can brew one or two cups at a time, in three different sizes, and the results are as advertised and exactly what you want- intense coffee with a thick foaminess that offers a jolt of caffeine and some of the bitterness but a smoother, more even flavor and at it’s best is much less sour than most espressos. Simmered instead of boiled, unfiltered, it’s traditionally consumed with a bit of sugar added directly to the grounds while brewing, and maybe accompanied by a cinnamon stick. There’s often cardamom in the brew that adds a spicy herbal note that is hard to replicate.

Unlike a Keurig machine, the Arzum Okka won’t be much help for cups of tea (or other beverages). It’s a single-purpose unit, fairly large for a small counter, and can take a few tries to get everything right. However, it’s much simpler than using an authentic cezve. You’ll still want to find fresh beans, and ideally grind them immediately before use. But then it’s a fun process, one that your friends will be amazed by, and any java-lover will appreciate. Turkish coffee might just be the next big thing, and there is an easy way to make it part of your life, that doesn’t require regular trips to Istanbul- the Arzum Okka is available now online and in stores for around $340.

Keurig Brews For One With the Mini-Brewer 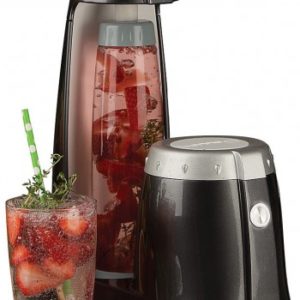 Mr. Coffee and VillaWare: Simple and Sexy In The Kitchen